...me and Mom in the kitchen
In the spring of 2006 the Fort Worth Star-Telegram invited readers to submit their favorite memories of "mom", with the promise to publish their picks on Mother's Day. I submitted the story below and the editors chose it for publication. I'm proud of that, not because they published something I wrote, but because they allowed me to honor my mother. Here's my favorite memory of her:
"Even though I didn’t think it great at the time, my mom taught me to cook—and clean, and iron, and wash clothes (neatly separated by colors, of course)—and handle all the other chores one needs to know to run a household. As far as the ironing goes, I managed to keep that a secret from my bride, at least until mom came for her first visit and spilled the news. The fact that I could operate a sewing machine, mend pants and sew on buttons remained hidden until the wife and I had been married a few years. She still distrusts me over that issue.

Learning to cook was fun because mom made it so. Even Sunday dinners after church took on a festive atmosphere for me and my two sisters, and that was only due to our mother’s efforts to turn mundane ingredients into a feast. Then we’d sit around the table, stuffing our faces as we offered critique on the preacher’s sermon that day and laugh about how he seemed to dredge up the same illustrations several times a year. One of those stories involved a little girl in an orphanage surrounded by an iron fence. Having few friends and no one to play with, she would write notes and slip them through the iron bars or hang them from a tree limb bordering the property. Most of those notes went unnoticed, or just blew away, but one day a passing gentleman picked up the note while out on a walk and was touched by the sentiment he read, written by a lonely child just reaching out to someone, anyone. It said, 'Whoever reads this, I love you'. That touching, yet amusing story came to be a running joke in our family, and we’d occasionally put those six words at the bottom of letters, grocery lists, post cards, etc.

The years came and went; I headed off to college as did my sisters. While in college, I realized the value of what mom had taught us about handling household chores. Her lessons served me well, and even later on I realized that I could use my culinary skills to impress the ladies. Yes, indeed, mom knew what she was doing! To this day, my wife still loves it when I cook for her; it’s one of those little things that say 'I love you' without having to utter a word.

As our children grew up, we made sure they learned those same lessons and as our sons got to high school age, the four of us took delight in cooking for my parents, sometimes even going to the extremes of packing up food and utensils, making the hour drive to their home and preparing a meal for them. It was on one of those trips that I left my favorite apron behind, and this wasn’t just any apron. It was custom made to my specifications by my sweet wife and was even stenciled with my name on it. Great apron, too. Has two pockets, adjustable neck strap, multiple loops for holding towels, and is, in short, the perfect apron. No worries, though, as I knew I’d retrieve it on our next trip to East Texas to see mom and dad.

Unfortunately, things didn’t turn out that way, as in mid March of 1998 while being treated for pneumonia, mom went into cardiac arrest. After being in a coma for two days, she passed peacefully out of this life and into eternity. Some weeks after the funeral, as I was helping dad go through things so he could reorganize his house—and his life—I came across my apron. It had been washed and was neatly folded so I put it into the stack of things my wife and I would take home. Helping dad do this task was a sad duty, but he truly needed help as he was not accustomed to surviving without his love and best friend of 53 years.

A couple of weeks later, I was preparing to spend a Saturday afternoon cooking up some Cajun dishes for dinner. Our whole family (including mom and dad) always enjoyed my fare from southern Looseeanna and we’re all fans of the late humorist and Cajun Chef Justin Wilson. As I began the slicing and dicing, my dear wife reminded me that I needed my favorite apron and she went to retrieve it from its normal place, hanging on a hook in the pantry. Slipping it over my head and tying the sash, I felt totally prepared to feed the masses, or at least our family of four. Stepping towards the sink, and reaching my hand into one of the apron pockets, I pulled out a folded piece of paper. Upon straightening out the note-sized page, I recognized my mother’s handwriting on one of her monogrammed notes. Through increasingly blurry eyes, I read the words, “Whoev 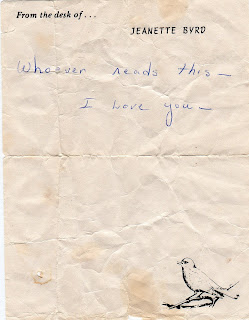 er reads this, I love you”.

It’s been eight years since I found that note and it remains in the left pocket of that apron. Sure, I look at it occasionally, but now instead of making me teary eyed, it puts a smile on my face as I realize the favor mom did me not only by making me learn to cook but in taking those kitchen opportunities to enrich our family memories. That little slip of paper now has various food stains on it and has started to yellow but that’s okay. I’ll pass it, and the apron, on to my two sons. Maybe I’ll write my own note to go with it. "
Happy Mother's Day, Mom. I miss you.
Blessings,
Ken
Posted by Ken at 6:54 PM 3 comments: